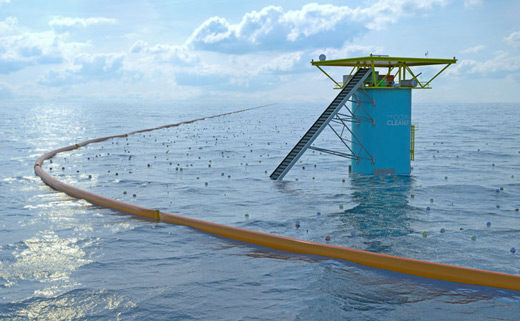 A 19-year old Dutch entrepreneur has released a peer-reviewed feasibility study detailing ambitious proposals to rid the Pacific of half its plastic waste in ten years. Boyan Slat, who gave a TED talk in 2012 to introduce his idea, is already half way to achieving his $2m crowdfunding goal.

Millions of tonnes of plastic have already entered the oceans, according to UNEP, with between 10m and 20m tonnes estimated to reach the oceans annually. Much of this ocean plastic waste is concentrated in five rotating currents, the ‘five gyres’, where they gradually break down into a ‘plastic soup’ of tiny plastic particles. And there’s increasing evidence to suggest that this plastic is entering the food chain, scientists say.

Few viable solutions exist to clean up all the plastic waste in the ocean, and so far the solutions proposed often involve vessels and nets that would ‘fish’ for plastic. This would create by-catch and generate significant carbon emissions, according to Slat and his team, costing billions of dollars over thousands of years.

Slat’s concept revolves around the idea of ‘passive collection’. His idea is to harness the wind and ocean currents and use them as a free, clean source of power to capture waste using v-shaped floating barriers and platforms attached to the sea bed. This solution avoids by-catch and is highly scalable, according to Slat, covering millions of square kilometres. The Ocean Clean-up report estimates that the plastic collection rate would total 65m3 per day, with waste collected by ship every 45 days.

The solution may cost €31.7m per year, which sounds high but is more than 30 times cheaper than conventional clean-up methods, according to the report. To help minimise costs, Ocean Clean-up is outsourcing most of the fundamental research to institutes and is also collaborating with various companies to take the project forward. Slat also hopes to offset the collection costs by recycling the recovered plastic.

“Studies exploring technologically sound, clean and cost-effective solution to recover ocean waste are to be applauded,” says Mike Biddle, MBA founder and president of Waste Free Oceans. “Should Ocean Clean-up go ahead, the question of what to do with the recovered waste will be vital. If it can be processed effectively, it would create a valuable stream of secondary raw materials and make substantial in-roads into tackling plastic pollution in our environment.”